Art Inspired by Cannabis and How Cannabis Can Inspire Art

As recreational cannabis use increases worldwide, more creative souls are going green with confidence, producing unique cannabis-inspired works of art. Cannabis has always been a great tool to inspire creativity, focus, and energy. Artists utilize cannabis not only to inspire their creativity but as a focal point in their artwork. - Written by: Kim Carreño

Preclinical studies have shown cannabis may increase cerebral blood flow and frontal lobe activity, stimulating creative output. Some artists find it helps alter their creative consciousness, expanding space and time and enabling new sensory experiences. Cannabis has been at the center point of many artists’ work dating back to the 70s.

Fred Tomaselli’s - Super Plant was created in 1994 with Cannabis in mind. Tomaselli was known for creating many art pieces that highlighted cannabis, and much more. Tomaselli made collaged paintings while incorporating unconventional materials and depicting hallucinatory, surreal scenes. Fred Tomaselli was born in Santa Monica, CA, and grew up in the hippie 1970s culture on the west coast before moving to New York, where he immersed himself in the city’s artistic community. 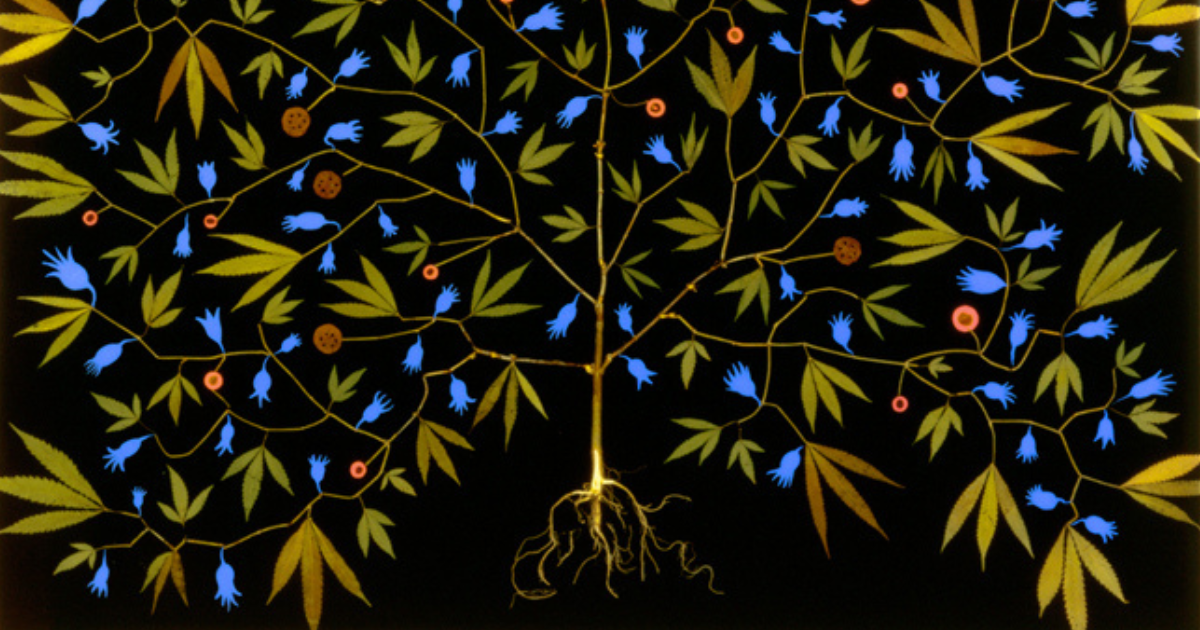 In the 1970s cannabis had been a source of connection to utopian visions, so he incorporated these materials into shimmering, glittering works of art that combine natural imagery with patterns and surreal backgrounds, blurring the lines between the natural and the artificial.

Robert Arneson, born on September 4, 1930, in Benicia, CA was an American sculptor and ceramicist who is considered the father of Funk Art. His artistic inspiration draws upon the unfair characterizations he felt he was subject to as a cannabis artist working in the state of California. 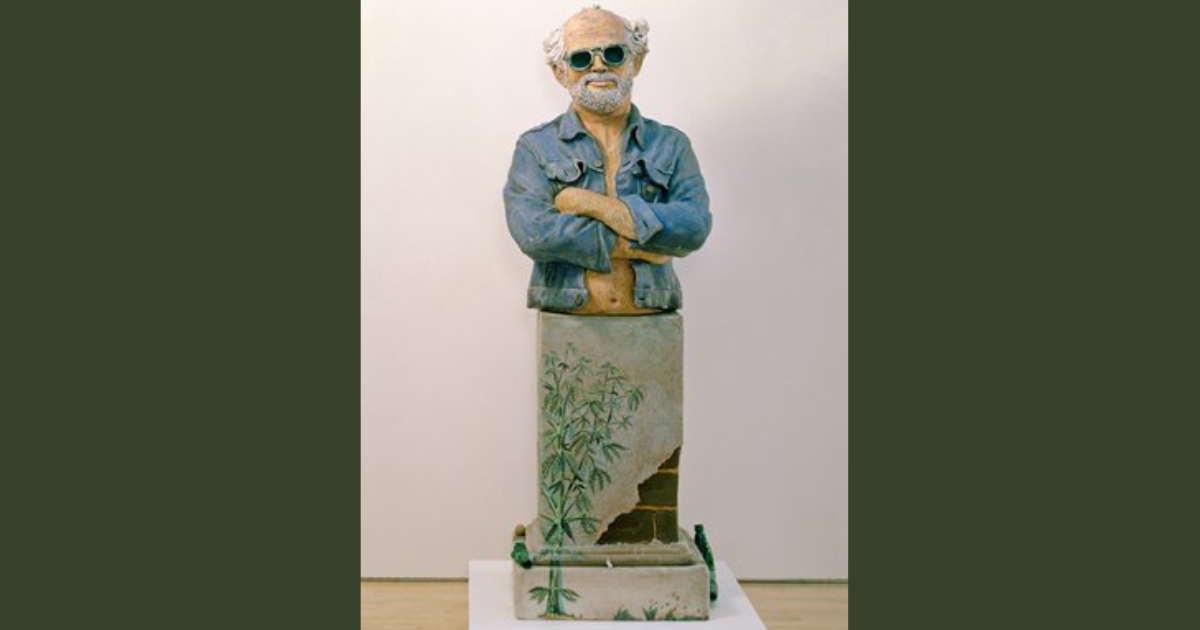 Robert Arneson created the stone sculpture ‘’California Artist’’ in which he portrays himself as a king of backwoods hippies, complete with an open denim jacket, a salt-and-pepper beard, and, yes you guessed it, a cannabis plant.

Many Artists that have utilized cannabis as inspiration in their contemporary artwork did not have it easy back in the 1970s or the 80s. They often received judgemental and negative feedback on their artwork.

However, this did not stop the greats from making their way to the top. Robert Arneson studied at California College of the Arts after working as a cartoonist for a local newspaper. In 1962, he was appointed professor of ceramics at UC Davis.

Artists like Robert Arneson utilized old-school strains such as Super Silver Haze, Ak-47, and even Chemdawg to inspire their artwork and motivation. Artists over the course of centuries have used many methods to inspire creativity, and cannabis is one of them.

If you prefer not to smoke while consuming cannabis, there are alternatives for those artists who prefer to ingest their weed. There are options for every style and effect that cater to almost every need. You will find many suggestions throughout this article that highlight not only strains that pertain to smokables but edibles too.

In this example we are highlighting Plus Gummies, Lemon Jack. It is a well-known strain, famous for its purported uplifting, focused, and creative effects. It is an excellent option for artistic souls that wish to make their artwork come to life.

Maureen R. Drennan, a photographer based out of New York City, created the series ‘’Meet Me in the Green Glen’’ which documents a farmer named Ben, a cannabis grower in northern California. The project started when Drennen met Ben at a motocross shop in San Francisco. Ben invited her on a tour of his farm just before harvest when the plants were at their peak. 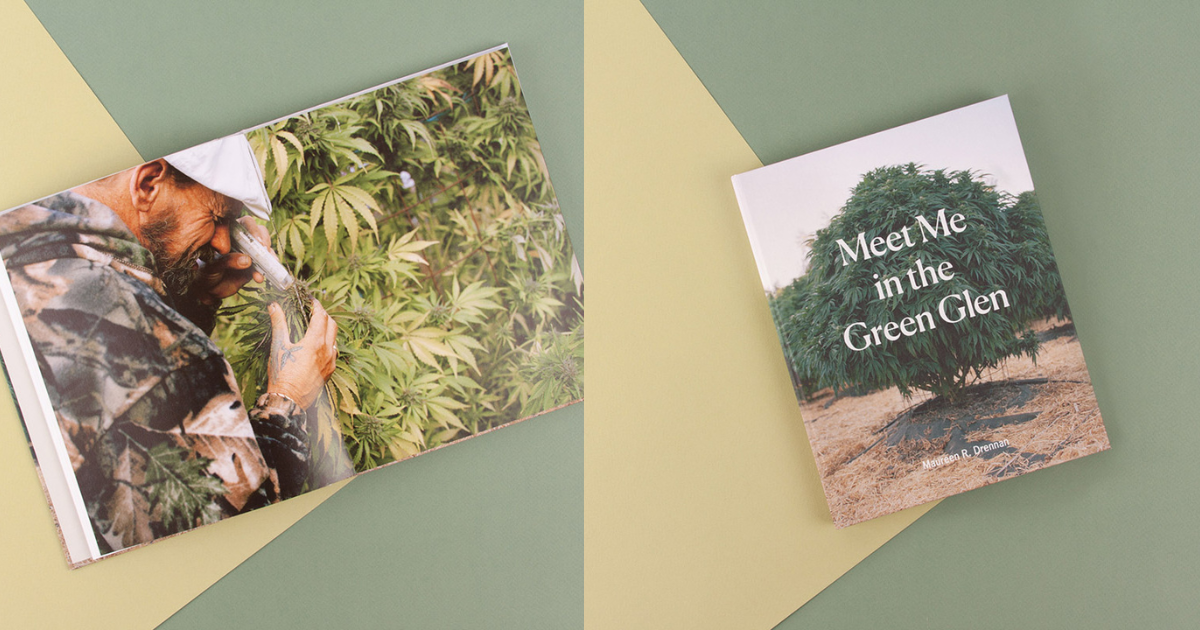 The series shows the seclusion of the life of a worker in an ever-evolving, competitive and unsteady industry. Since the production and sale of cannabis are still illegal under federal law, it still carries a stigma among a large portion of the population.

A quote from Maureen R Drennan: “Meet Me in the Green Glen“ is an intimate photographic look at a reclusive marijuana grower in California. He was an isolated man whose environment was both ominous and verdant. We met several years ago and through this project became close. I photographed him for nine years while the laws and stigma around marijuana cultivation changed radically in California.

This farmer, Ben, was growing marijuana for years before it was legal and had to carefully navigate the legal system to grow, maintain, sell, and transport his product. Although marijuana is legal to grow and use within guidelines, there are situations in which it is still illegal. It continues to be a murky world.

American Literature has a significant influence on my imagery. I am drawn to narratives, photographic, literary, cinematic, or documentary- in which characters are crafted out of place, or in which places actively become the characters themselves.''

Many professional artists find themselves inspired by cannabis in different ways and in this case, some prefer to study the art rather than consume it. Drennen was passionate about learning the craft, the environment it was held in, and learning about the process of how to create famous strains like Sour Diesel, Northern Lights, or Blue Dream.

Vincent Gordon grew up in Chicago and his journey began when he landed an apprenticeship with sculptor and professor Jeff Thompson. The opportunity helped Vincent develop and learn not only from professor Thompson but from many renowned contemporary artists at his young age. 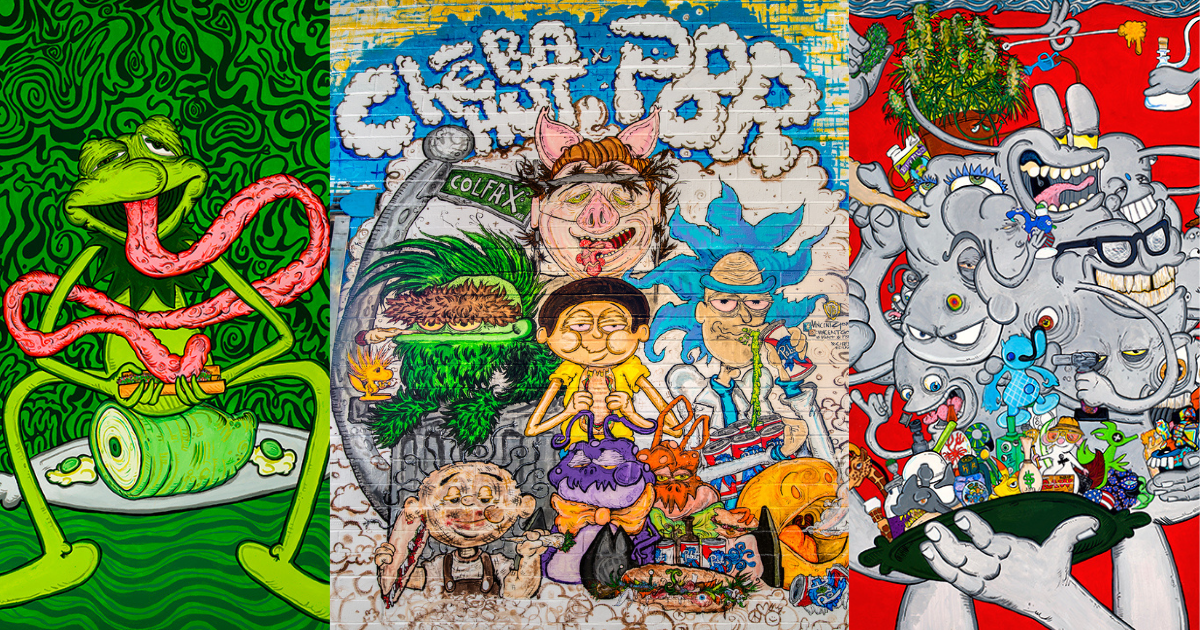 In 1995, cannabis found Vincent. Once Vincent felt the positive effects of cannabis, he truly changed his life for the better. The negative legal and social ramifications of partaking in cannabis fueled Vincent’s naturally given rebellious spirit. This inspired many cannabis art projects that led Vincent into more trouble.

Vincent spent most of high school in the art wing, focusing on art in a world where it was often considered a leisure activity and not a legitimate career option. Vincent hopped around the United States from Colorado to Los Angeles and finally made his way to San Diego where he began growing medical cannabis, making art, and enjoying the beach.

Vincent’s paintings highlighted items like concentrates, flower, edibles, and more. He enjoyed making murals and collaborations with fellow artists that also enjoyed breaking the stigma and wanted to help normalize the consumption of this plant we all know and love.

How to Grow Indoor Weed for Beginners